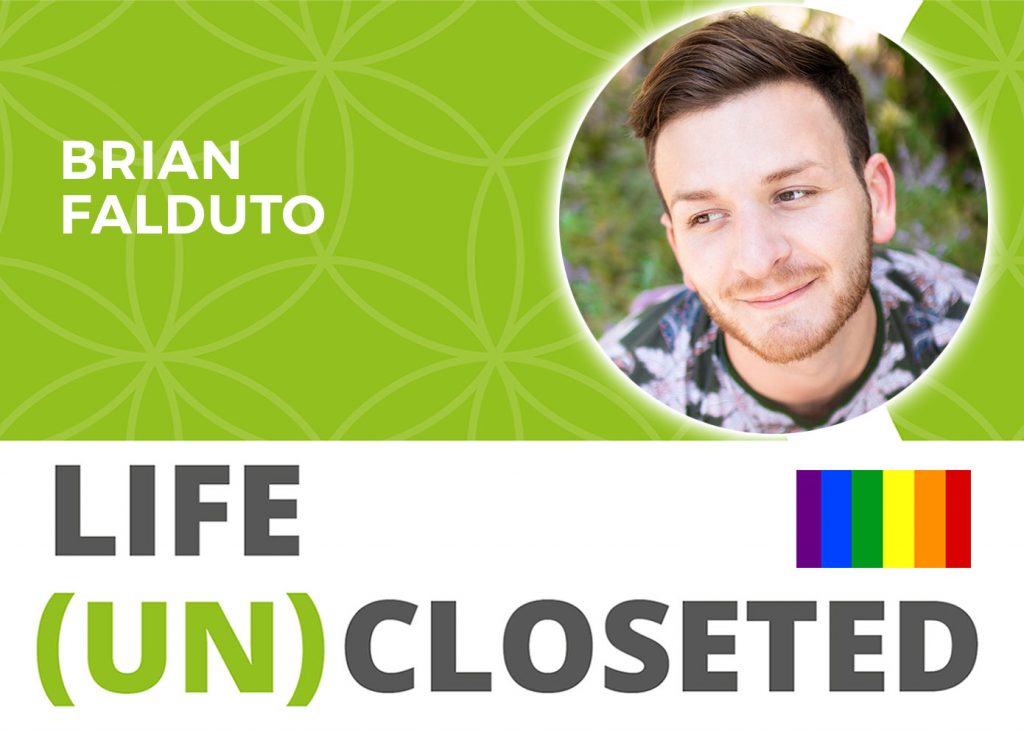 Imagine being cast in a major motion picture, and suddenly having to fight your truth, or at least hide it until you are ready. You fight it, don’t want to confront it, and basically avoid it because you have to heal yourself before you can be yourself. Sound familiar.

Brian Falduto of “Fancy Pants” fame from the movie School of Rock, had to start hiding and confronting his truth at age 11, in front of the world. Then he realized, his truth is his truth. Now this actor, singer, and life coach, guides others to freely step into their truth without shame. We’re kicking off this pre-pride show with a fun and candid conversation about letting healing guide you to your truth to have PRIDE in yourself. Also make sure you stay on the lookout fro Brian’s new music video – God Loves Me Too – being released during PRIDE season.

At the age of 11, Brian was cast alongside Jack Black by casting director Ilene Starger and Golden Globe-winning director Richard Linklater in the Scott Rudin / Paramount Pictures film School of Rock as Billy, a.k.a. (“Fancy Pants”). Brian returned to working on and pursuing his craft in college. A dual-degree graduate in Theatre Performance and Arts Administration, Brian proudly calls himself an alumnus of Wagner College.

Since college, Brian has immersed himself back into the industry, working with renowned theatre organizations such as the Broadway PR firm DKC/O&M, the Broadway producing company Jujamcyn Theatres, the regional Paper Mill Playhouse, the Off-Broadway show Fuerza Bruta, the Venus / Adonis Theatre Festival, and the New York International Fringe Festival. He has also taken a dive into the world of radio with various formats including 95.5 WPLJ, 77WABC on the AM dial, and Radio 103.9. However, he is especially proud of the role he had in helping bring country music back to NYC with NASH FM 94.7, the flagship station of the now national and influential NASH brand.

Bit by the music industry bug, Brian is now a singer-songwriter himself, delivering heartfelt lyrics through infectious melodies. His debut, acoustic EP, “Love One Another” was released on June 13, 2017 and within 24 hours hit #94 on the US iTunes Singer-Songwriter charts. By the end of the week, it was #64 on this same chart in the UK and #31 for overall album sales on iTunes in Norway. Prior to releasing his 2018 Live Performance Session series on YouTube, Brian spent the majority of 2017 sharing his music live in concert throughout the tri-state area and also devoted some time partnering with various non-profits including The Trevor Project, H.D.S.A. (Huntington’s Disease Society of America), S.A.G.E. (Services & Advocacy for GLBT Elders), and H.E.A.R.T. (Help Educate At Risk Teens Foundation), all causes dear to his heart.

Brian was recently named one of the “20 most influential, outspoken, and optimistic individuals on the planet” by PrideLife Magazine in their 20th Anniversary #20intheir20s issue.

The past few Pride seasons have brought great opportunities for Brian to continue his advocacy for the LGBTQ community with Broadway Sings for Pride at their 8th & 9th annual star-studded benefit concerts for the Tyler Clementi Foundation & through his own efforts organizing NYC’s 1st ever LGBT Songwriter’s Night in support of The Trevor Project, a now annual event.

Most recently, Brian has had some amazing opportunities to share his life story openly and honestly through both a self-written piece in The Advocate and a heartfelt interview with Now This News, both of which have since gone viral.

Brian is the founder of his own life coaching business in compliance with the International Coach Federation standards and is part of the marketing committee for the Gay Coaches Alliance. He also hosts “The Gay Life Coach Podcast,” which provides biweekly queer mindfulness content & can be found on Instagram as @thegaylifecoach.

Brian’s 1st studio album “Stage Two” dropped at the end of 2018 & featured the lead single, “Rainy Day.” He and his band recently performed at the East Coast Music Conference in Norfolk, VA just prior to heading out on a June 2019 #PrideMonth tour with a full set of #gaycountry tunes. Brian has been booked to speak at ECMC again in 2020 and will do so following the release of the music video for his forthcoming single, “God Loves Me Too.” Meanwhile, his latest release “Like a Wave” is currently rippling through the digital streaming world.