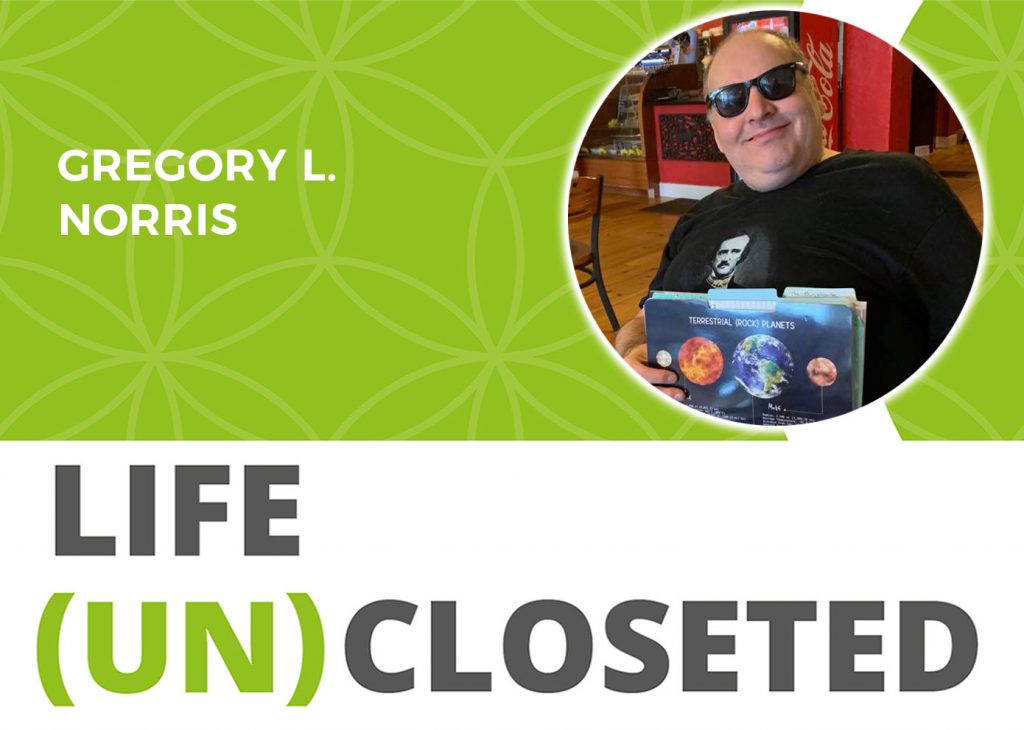 We all have our story. We live our story daily. And, some of us take our stories, and the stories in our heads and turn them into our passion purpose…as a an author, with thousands of pages of articles and books. Gregory L. Norris is that person, a gay author who writes the stories that brings his life to life, even if many of those stories are fiction…because that is what brings him alive. Today we’re exploring his new book, Ex Marks The Spot, and how the joy of coming out to be who he is has shaped his life.

Raised on a healthy diet of creature double features and classic SF TV, Gregory L. Norris writes regularly for numerous short story anthologies, national magazines, novels, and the occasional episode for TV or film. Gregory novelized the NBC Made-for-TV classic by Gerry Anderson, The Day After Tomorrow: Into Infinity (as well as a sequel and a forthcoming third entry into the franchise for Anderson Entertainment in the U.K.), a movie he watched as an eleven-year-old sitting cross-legged on the living room floor of the enchanted cottage where he grew up.

Gregory won HM in the 2016 Roswell Awards in Short SF Writing and took home first place in the Queerotica fiction competition in 2018. He once worked as a screenwriter on two episodes of Paramount’s Star Trek: Voyager. Kate Mulgrew, Voyager’s “Captain Janeway,” blurbed his book of short stories and novellas, The Fierce and Unforgiving Muse, stating, “In my seven years on Voyager, I don’t think I’ve met a writer more capable of writing such a book—and writing it so beautifully.”

In late 2019, Gregory sold an option on his modern Noir feature film screenplay, Amandine, to the new Hollywood production company Snarkhunter LLC, owned by actor Dan Lench, a devotee of Gregory’s writing. In late 2020, Snarkhunter optioned Gregory’s tetralogy Horror film based upon four of his short stories, Ride Along. That same month, his short story “Water Whispers” (originally appearing in the anthology 20,000 Leagues Remembered), was nominated for the Pushcart Prize. Gregory lives and writes at Xanadu, a century-old house perched on a hill in New Hampshire’s North Country with spectacular mountain views, with his rescue cat and emerald-eyed muse.