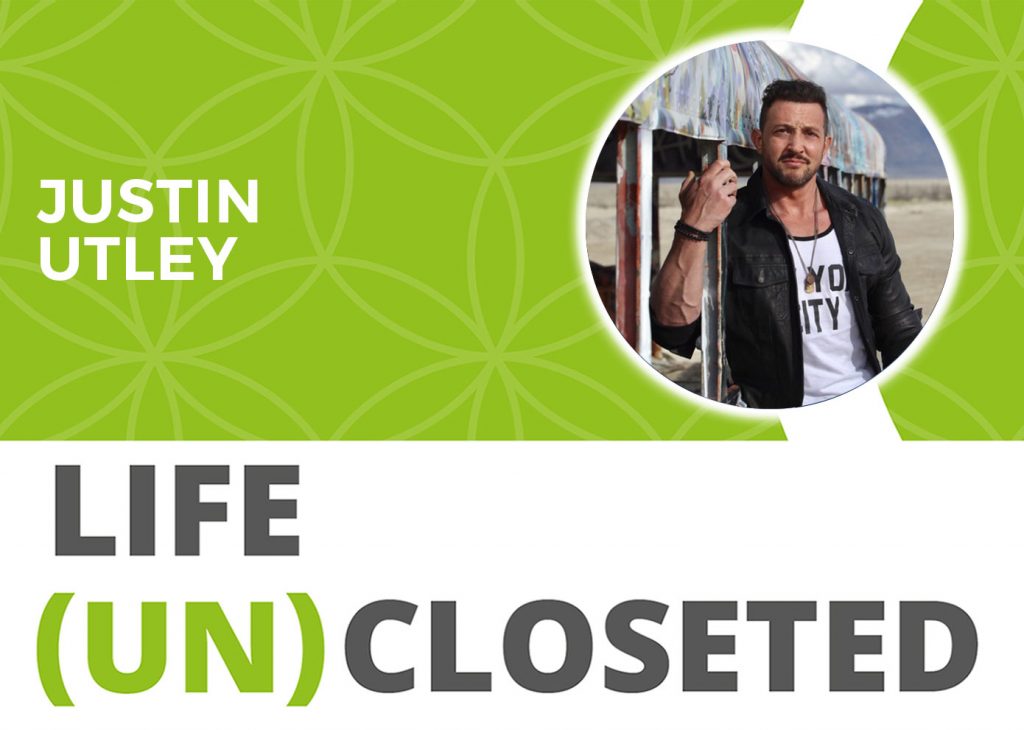 It is estimated that over 20,000 LGBTQ minors will be subjected to conversion therapy (reparative therapy) treatments in states where protections do not exist to prevent this cruel and ineffective treatment (Williams Institute at UCLA School of Law).  For those who have endured these practices, an overwhelming majority of them have faced this treatment due to erratic religious beliefs and practices. Fortunately for the music world and the rest of us, Justin Utley, OUTMusic Award winning singer/songwriter, he survived and is thriving beyond the reparative therapy abuse he received.

As we approach National Coming Out Day 2019, I felt it was important to focus on the power of coming out and being yourself, and the negative impact that these practices have on individuals and the world at large. Justin, candidly shares his story and how it has influenced his music and the songs that he has manifested – Survivors and Scars – that shine a bright light on the emotional trauma of conversion/reparative therapy.

OUTMusic Award winning singer/songwriter Justin Utley has released “Survivors,” the debut single from his soon-to-be-released third studio album, Scars. Recorded in Salt Lake City, “Survivors” is an anthemic pop track, written by Swedish songwriting duo Linda & Ylva, reworked and expanded upon by Utley to include his rallying cry against conversion therapy, the disproven pseudoscientific practice of attempting to change an individual’s sexual orientation using psychological and spiritual interventions. The stirring music video to “Survivors” features a collaboration with the University of Utah Chamber Orchestra, and the orchestral version will be featured on the forthcoming album. “Survivors” is being distributed independently and is available on Apple Music, Spotify and all digital platforms. During the month of July, all proceeds from “Survivors” will be donated to the Born Perfect Campaign, an organization working to ban conversion therapy.

“Survivors is about facing and overcoming insurmountable odds and learning to thrive in the face of adversity,” explains Justin Utley from his Salt Lake City home. “It’s about survivors of abuse in all forms and how it takes a great deal of effort to move forward in life while carrying the heavy burden of trauma.” Justin Utley knows about survival first-hand. He grew up in a devout Mormon home, believing his same gender attraction was an addiction, disorder, and learned behavior. He was required to undergo two years of faith-based conversion therapy, even taking medications prescribed to help suppress the feelings.

The therapy wasn’t successful and Justin began dating men. However, his newfound joy of freedom quickly turned to grief when the man he dated died from a suicidal drug overdose. Justin’s bishop asserted the death was a sign of God’s displeasure. Soon after, Justin’s employer discovered he was gay through monitoring his company email. At the time, Utah had no protections in housing or employment and so it was legal for them to terminate him, and they did. “My entire existence seemed to be broken and unfixable, and I got to a point where I thought not existing would be a better option. Working through that dark period of my life was probably one of the most difficult things I’ve ever done.”

Justin Utley’s experience with discrimination, religious bullying, his own internal homophobia, and suicide are all depicted in the music video for “Survivors.” It features a little girl (played by Justin Utley’s niece!), confronting a fight or flight moment, who learns that she has the power to survive, thrive, and learn to fly. It perfectly echoes Utley’s life mantra: even if you can’t see a silver lining, you can make one.
Born and raised in Utah, Justin Utley’s music career took off when he was selected to perform at the 2002 Winter Olympics in Salt Lake City. After breaking ties with his Mormon roots and moving …