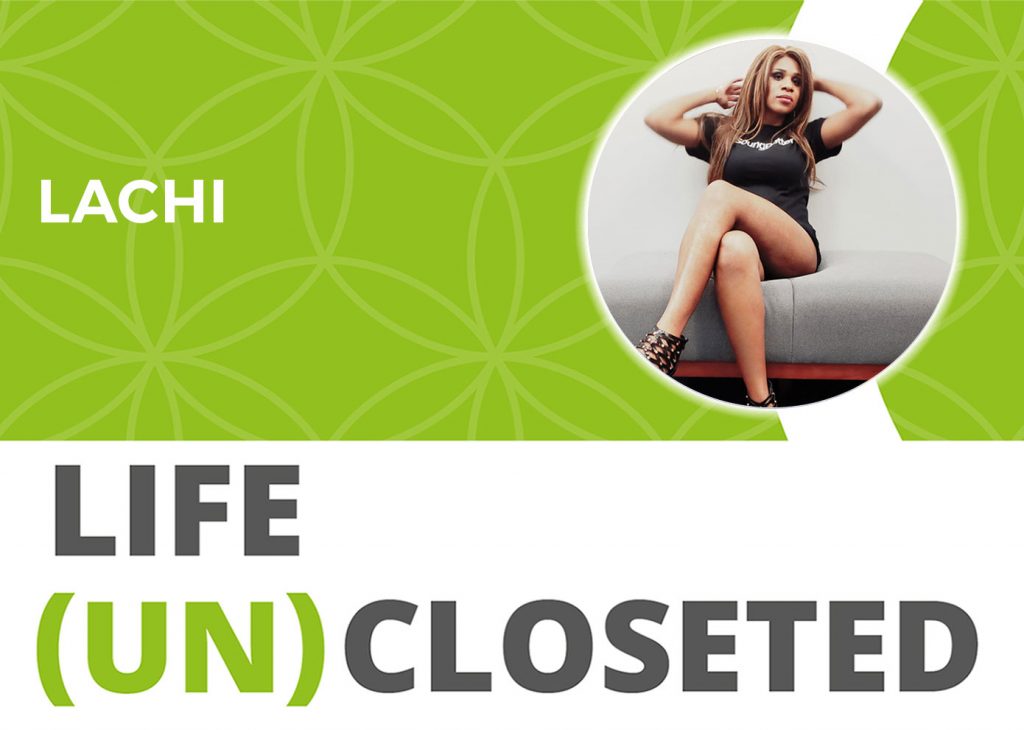 Sometimes the bolder move of coming out of the closet is something that you can’t see and others can’t see in you. When we say, “See,” we mean, you should take that word literally. Yet, being legally blind doesn’t mean you can’t do the bolder things you want to do, go the places you want to go, or make the dreams come true that you want to make come true. It simply means you become even bolder in pursuit of the life that you desire.
Pop singer on the rise, Lachi, an emerging EDM singer, songwriter, dancer is making ripples that could easily turn into a Tsunami in the music world. While other may want to focus on her disability, she’s focused on making shit happen in her one life to live, because for her seeing it in her mind’s eye is believing that she can be a music artist success. This is her candid, fun, raw, real, and a little bit trashy talk at times story about coming out of her closet to be the performer she wants to be and the women that is inspiring other women to say, “What I want…!”

Pop singer Lachi and emerging Danish EDM producer Julian Javan unite again on “What I Want (Dat Body),” their sexy new club track inspired by the wave of fierce women representatives redefining today’s political scene.  “Today’s women are more than pretty little dolls, we are bosses and power players taking charge of this world,” declares Lachi.  She says when it came to writing her latest song, she imagined all 131 — the number of women now serving in both chambers of the 116th  — walking into a club and picking out their choice of men.  “I’m the type who can walk up to that cute guy at the bar and buy him a drink,” she explains. “I think all my fearless ladies are the same way.  That’s what being a woman today is about.”  “What I Want (Dat Body)” is being released in the USA through Big Management and internationally through Warner Music’s Quattro and is available for purchase on iTunes, Amazon, and all other major retailers. It is also available for streaming through Pandora and Spotify.

Lachi knows about overcoming barriers in order to achieve her goals.  She was born legally blind into a first-generation Nigerian immigrant family. “We moved around a lot to make ends meet.  I grew up in the blackest parts of Philly, the whitest parts of Upstate New York, and I southern-belled it in North Carolina. No matter where we were, I was always so different from everyone else. It was tough to make friends.”

She refused to let her disability define her. “I have always hated the ‘wow, she’s blind AND can do things!’-type BS.  I was raised to believe that no one was going to be throwing me any pity parties.”

Education was a priority for her parents and after high school, Lachi attended University of North Carolina at Chapel Hill.  It was there that she began performing live music. “I would sit at the piano in my dorm lobby and play for all the drunken frat kids as they returned home,” she laughs. Word of the talented vocalist spread around campus and eventually, she had a large-enough following that she was invited to perform small venues in town.  When she moved east to attend NYU, she continued performing in New York City.

Today, Lachi is an international pop, EDM and soul artist, as well as a songwriter and producer.  She has worked on numerous projects including the single, “Rude,” with rapper Snoop Dogg and “Far” with trance producer Markus Schulz, featured on his We Are The Light album.

She writes songs from the perspective of a smart, empowered female, incorporating thought provoking, emotive themes (as in her “Living A Lie” single with Styles P) to kitschy compositions (as in her track “Allegedly”).

“What I Want (Dat Body)” is Lachi’s second collaboration with Julian Javan.  Their previous single, “Namaste,” released in spring 2018, was a passionate, high energy, EDM track that blended Pop with hints of Mombathon.