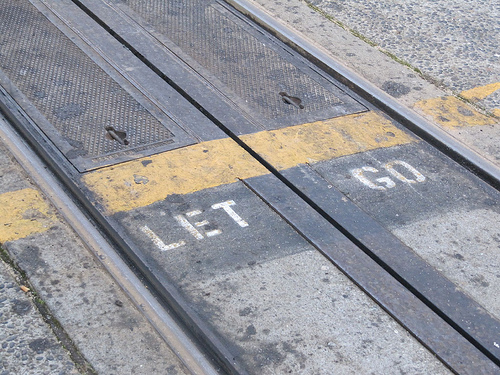 Do you remember being on the playground and being told to “Let Go,” or maybe during a game of war being yelled at to “Surrender”? As a child those were powerful words. Now as adult gay men, if were told to “Let Go,” or to “Surrender,” at times it can be a direct hit to our masculinity and ego. Anytime we’re told to do anything, especially if it isn’t something we enjoy or agree with, we have an emotional reaction. Understandable, and I’m not implying that we roll over and get walked on.

What I’m questioning though is why we don’t allow ourselves to listen to ourselves in those moments, when it is in our best interest or even more so, right for us to “Let Go,” or “Surrender.” Are we really that set in our ways as gay men that we can’t see the internal turmoil a situation, thought or behavior is causing us to be at odds with our own well being and what’s right for us? I stumbled upon this “best” vs. “right” concept while at the funeral of a dear friends mother. My friends’ brother was delivering the eulogy and made this statement. “Parents always want what’s best for their kids. Sometimes they just don’t know what’s right for their kids.” Did you hear that? If not re-read that last sentence.

The power of what he said resonated with me as a father, but also as a man, a gay man, who at times finds himself not able to “Let Go,” and “Surrender.” However, if I allowed myself to do what’s right for me rather than to do what I think is best for me, I might just be a little more prone to letting go of the crap that I believe is in my best interest and surrendering to what’s right for me.