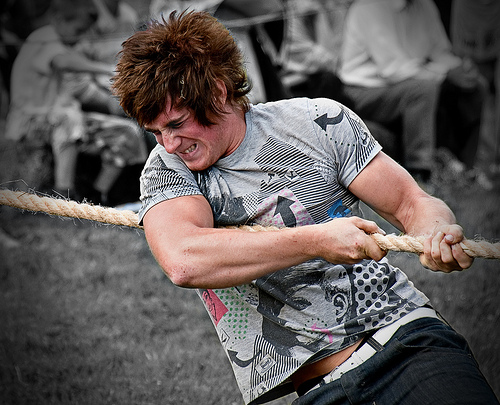 Let’s be honest. We all do it. That crazy little thing called the tug-of-war between the logical head and sappy heart. Admit it! You’ve been there, done that. It doesn’t matter if you’re…

Regardless of the debate, what would be different if you didn’t look at it as a tug-of war, and a battle to win? How about instead of saying  “#$%* it!”, instead you said, “Let’s drop it!” Set your hands free of the damn rope and stand still, very still and ask this one question…

“If I wasn’t making this situation a tug-of-war, how would it be different?”

Often it’s the drama queen in all of us that just sneaks up on us and says, “Let’s make this an Oscar-winning performance,” when all we really need to do is be still and let the stillness guide us!