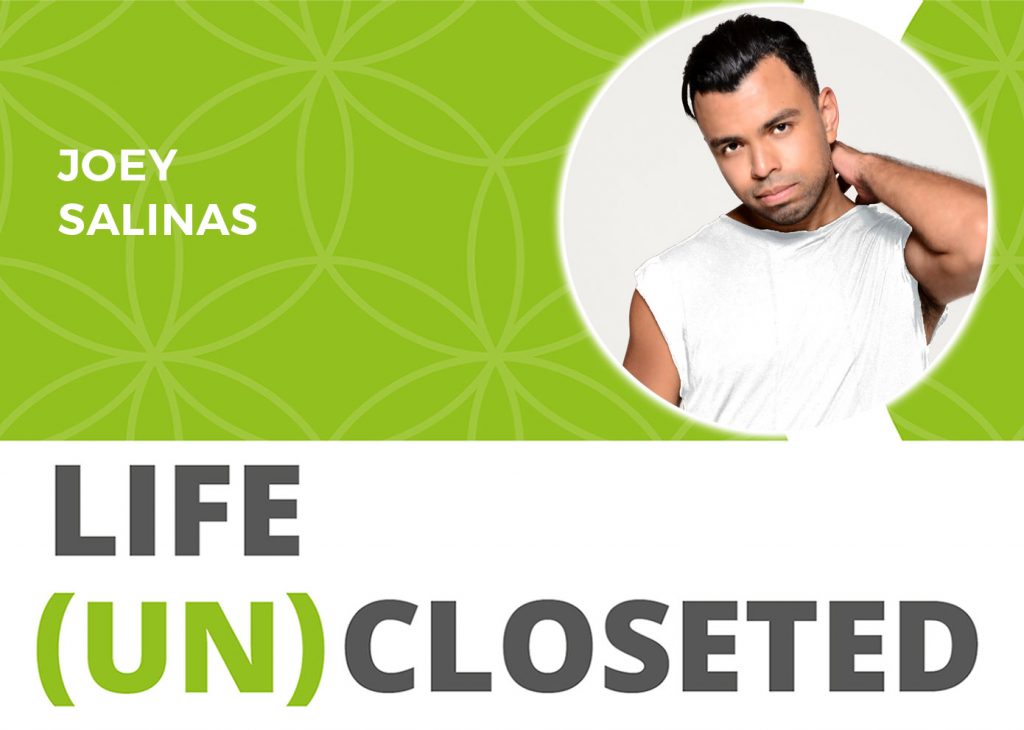 Sometimes you hit a big block wall life and realize “It’s My Time!” Through heartache, a wake up call or even a simple moment when you realize you do need to put yourself in the driver’s seat of your life, and that’s ok, no matter what anyone else says. Singer, artist, and dancer Joey Salinas, a a latin gay man, channeled all that energy into his latest pop song “My Time / Too Much Goin On” to help him come out of the closet of making others more important than himself. This is his Life (UN)Closeted story.

Joey Salinas’ “My Time / Too Much Goin On” is a traditional pop song about reclaiming one’s worth, not allowing anyone to define you, and accepting that some people are around for a reason or a season and it is up to you to know when their time is up.  Joey Salinas wrote the song after a tumultuous relationship that left him feeling empty and depleted. “I had lost all motivation,” he recalls.   “I needed to reignite my spark so I left Los Angeles for a summer to get back to me.” While out on his personal adventure, Joey enjoyed a romantic fling that taught him what he truly wanted from future relationships.   He returned home reinvigorated and determined to jump back into his craft.  He channeled his past frustration into not only “My Time”, but the entire Identity: Chapter 1 album. “My Time was the first song I cut and it helped shape the sound for the rest of the project, one that echoed my first album, ‘In the Beginning…’”  Joey Salinas’ “My Time / Too Much Goin On” is available now on Apple Music, along with all tracks from Identity: Chapter 1.  The music video for “My Time / Too Much Goin On” is available at YouTube.

“Sometimes you just have to take matters into your own hands and push forward,” Joey Salinas continues from his Los Angeles home. “That may mean letting go of those who no longer benefit your life. Too many of us continue in relationships that aren’t working in the misguided hope that things will get better.  Most often, they will not.  I learned that it is liberating to finally realize that you can move on to a bigger, more powerful life.”

“My Time / Too Much Goin On” is the fourth video release from Identity: Chapter 1, Joey Salinas’ pop album that is sprinkled with dance, R&B, rock, Latin fusion, and electro beats.  Each song on the album represents a different facet of his life.   The title track reflects on his many shades, colors and textures. “Stomp” attests to his drive to achieve goals; and “Wonderland” examines a romantic love in its infancy.

The overall message is one of self-discovery; figuring out what defines you as an individual. “I’ve always marched to the beat of my own drum,” Joey reflects.  “And I have always felt multi-layered, like there is more than one version of me.”

In the music video for “My Time”, Joey Salinas plays multiple characters to depict his different sides.  Drawing inspiration from Tim Burton’s Alice in Wonderland, he and director Wes Culwell created a concept of being trapped in a loop; in an illusion and not knowing it, like Alice in the film.  Joey likens Alice’s experience to being trapped in a toxic relationship.
The video was shot over two days in Washington DC.  It was choreographed by Viktor Wallace; assisted by Joey.  Andrea Masse-Tognetti of Merimask best known for creating the Egyptian masks for Katy Perry’s Prismatic Tour, created the White Rabbit steampunk mask that Joey wears in the video.

Other Alice in Wonderland characters viewers will recognize are The Madd Hatter as the master manipulator, The Caterpillar as the accomplice, and The Cheshire Cat as the pied piper DJ who helps lure victims into the illusion. The Red Queen appears as the bad influence and the tweedles are represented by the bartender and bar patrons.

Joey Salinas was born and raised in northern Virginia, the oldest of four children.  He was of the latchkey generation, so spent a lot of time alone in his bedroom with his music.   Mariah Carey, George Michael, Aerosmith, and Janet Jackson were his favorite pop artists and they remain a strong influence today.

Much of Joey Salinas’ music today explores the many facets of his identity. He is a strong believer that representation matters and while his songs’ sounds and subject matter are mainstream and universal, he expresses them from his own unique perspective as a gay man of Latin descent.