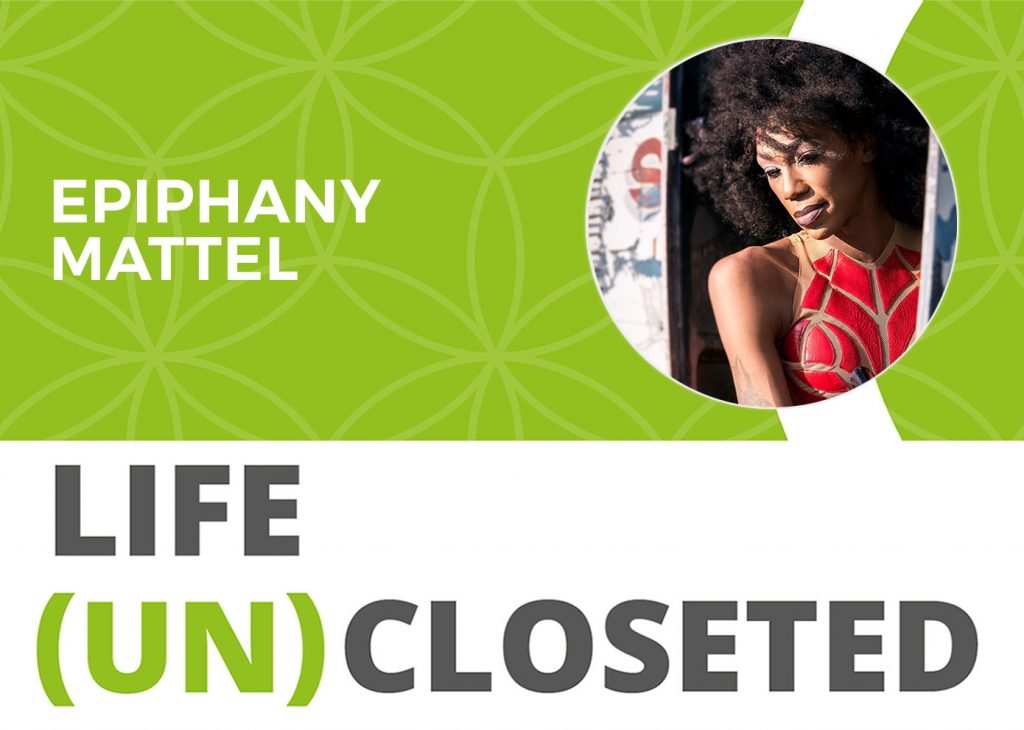 If you don’t respect yourself ain’t nobody else going to respect ya either…no matter how pretty yo face is or isn’t. And even if your own parents don’t respect who you are, then sometimes you just gotta sashay away and say, “I’m here to respect myself first and foremost and using that power to spread love and light.”

From praying the trans away to getting it beaten the hell out of her, Epiphany Mattel has found her path to being her, yes her, not him. Born a boy, but knowing from a very young age that she was a girl, she’s fixed her face and on track to fix a few other things to be the perfect doll she’s always been. This is her life uncloseted story, and don’t you dare think of changing it for her…LOL!

* Her Mom’s house got shot up because of this
* 20/20 wasn’t her hind site, it was her reality check
* Her Father was this but was also in denial
* Exorcism, praying it away, even mental illness didn’t change the music inside and the woman within
* Quote: You block your blessings

Epiphany Mattel grew up in Kansas City, Missouri. Her parents raised her to be confident and speak her mind, that is, until she told them that she was girl. Her mother, a devout Baptist, took the religious “God doesn’t make mistakes” and “let’s pray the demon out” path, sending Epiphany to priests, psychiatrists and other medical professionals to fix the problem. Her father’s approach was more physical. He sought to beat the trans out of Epiphany and would tease, taunt and shame her. At one point, he even shaved her head.

Once puberty hit, Epiphany left home and sought refuge in the hood where she learned about street code and survival. She became a dangerous beauty, a chameleon who can thrive in any circle or setting, a boss more concerned with creating her own lane rather than trying to fit into a predetermined space someone else chose to place her in. She stands strong in her truth, even if it offends others, and while she rarely starts trouble, she isn’t afraid to finish it. “My message is to respect yourself first and foremost and then use that power to spread love and light,” she explains.

Epiphany Mattel first met drag sensation, Latrice Royale, through a mutual friend when Royale was seeking a feature rapper for her song, “Weight”. “We instantly clicked like we’d known each other for years,” Epiphany remembers. Latrice Royale would eventually take Epiphany Mattel under her wing, becoming her manager and guiding Epiphany’s new rap career. “She recognized that a trans woman doing hip hop offered a different point of view from anything else out there. I can be as sexy as any cis chick in the game and as hard as any male: I’m the best of both worlds.”

Epiphany Mattel has big dreams. She aims to create a movement in sound; something similar to Neyo, The Dream, and Kanye West where other artists might create similar songs but fans will always recognize it as an Epiphany Mattel joint. “What I hope fans take away from my music is that they are not alone,” she says. Epiphany Mattel’s new single, “#FIXYOFACE,” is available on iTunes, Spotify and all digital formats.